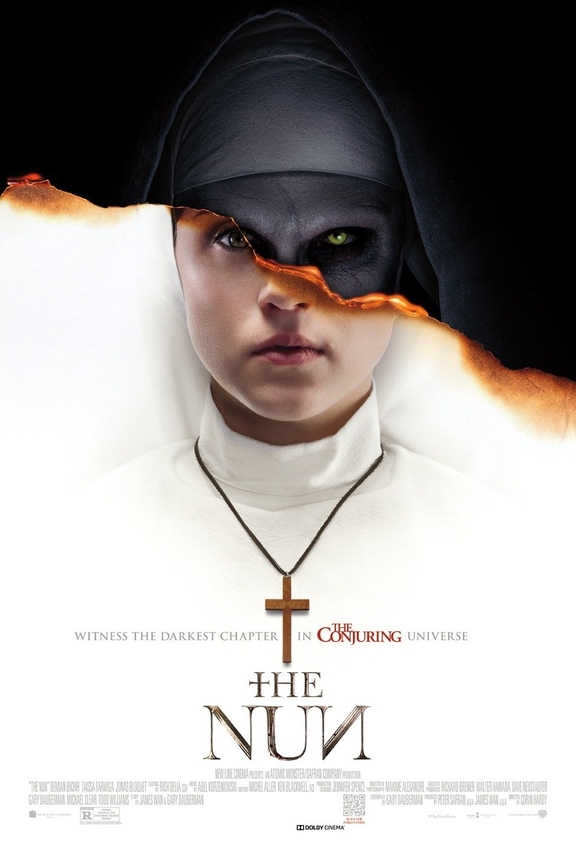 James Wan’s The Conjuring was praised by critics for breaking new ground in modern horror while simultaneously harkening back to the frights of classics like The Exorcist. Its success led to a sequel and the spinoffs Anabelle and Anabelle Creation, based on a demonic possessed doll featured in the previous films, that offered up some of their own satisfying scares, if falling a bit short of their predecessors. The newest addition to this horror cinematic universe, The Nun, is another spinoff based on the bone-chillingly frightening demon Valak that terrorized audiences in the Conjuring 2. Unfortunately, The Nun does not live up to its predecessors.

The film opens in the remote backcountry of Romania, where a convent of nuns is being tormented by a sinister force from beyond the beyond. The suicide of one these nuns causes the Vatican to send in Father Burke (Demián Bichir), a claimed expert in miraculous phenomena, to investigate this unholy occurrence. Father Burke quickly enlists the help of the wide-eyed novitiate Sister Irene, played by Tessa Farmiga, who experienced religious visions as a youth, and local incorrigible rogue Frenchie (Jonas Bloquet), who later in the film gets to fire the most literal interpretation of Chekov’s gun to grace cinemas this year. What follows next is less a maddening descent into Hell, and more a dull, lurching ride through a two-bit carnival attraction.

I won’t bore you with more plot details because the film largely becomes repetitive after the first act. Every scene meant to induce fear entails the same set up: close-up on a shadowy silhouette, usually cloaked in a misleading habit, cut back to fear-stricken protagonist, then whip out the pre-loaded jump scare consisting of stock demonic personage. Wash. Rinse. Repeat. These cheap thrills entertain for the first half hour and are sure to have those with a weaker constitution jumping from their seats, but as the movie progresses they become tediously predictable. Let’s face it, I’ve felt more abject horror looking at my monthly credit card statement than watching the tricks Valak has up his sleeve for the protagonists in this film. And that’s another problem with The Nun: the protagonists. The character development is shallow and unsatisfying. Father Burke is supposed to be an expert on the occult, but he shows less intuition and demon-combating ability than Scooby-Doo and the gang. Tessa Farmiga certainly plays the part of the spunky yet religiously dutiful heroine well, but we are never given a compelling reason to root for her. Frenchie gets a comedically timed one-liner here and there, but we know next to nothing about his personal motivations other than he seems to have the hots for Sister Irene. Tough luck, bud.

The real shame is the cinematography that goes to waste amongst the dreary plot; there are several well composed shots, such as when Sister Irene, surrounded by her fellow nuns, is desperately trying to ward off the demon’s approach through fervent prayer. The gothic, looming darkness of the abbey certainly sets the stage appropriately, but director Corin Hardy never does anything interesting with it.

Great horror movies should ask probing questions, disguising real life terrors in the veil of the supernatural and bizarre. Those that leave the audience with a sense of dread long after the credits have rolled are the ones that penetrate to the deepest, primal fears and uncomfortable truths of the human experience, such as The Shining. Great horror can come from a one-off gimmick if employed effectively, like the use of sound in John Krasinski’s stellar A Quiet Place, and even the B-level thrills and chills of films like Scream, but The Nun is none of these. It’s boring, unoriginal, and uninspired. However, it is a lesson in the importance of cohesive narrative structure. Like ghostly tales told around a campfire, there is no substitute for good story telling. Save your time, and your money, on this one. The only real soul stolen here is the one that Hollywood ripped from this lifeless script.