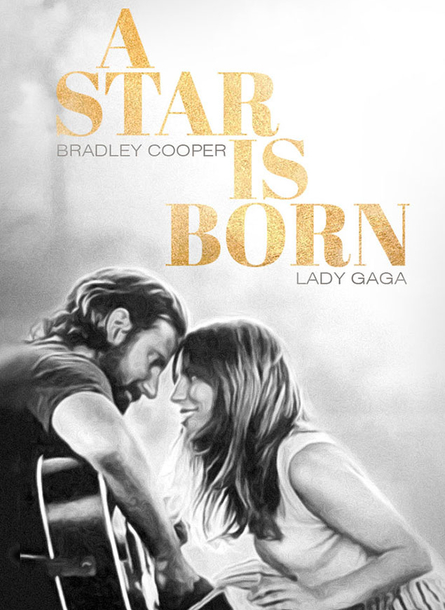 A Star is Born

“Look, talent comes everywhere, but having something to say and a way to say it so that people listen to it, that's a whole other bag,” Bradley Cooper’s character declares in A Star Is Born. With his directorial debut, Cooper certainly has found something to say.

This is the fifth iteration of the tale to be made: originating as a 1937 film, previous incarnations have included a 1976 rock musical starring Barbara Streisand and even a Bollywood film. If you have seen any of these versions, you will be familiar with the major plot points; however, “remake” feels an unjust term to use in describing Cooper’s movie, particularly with the negative connotations brought on by modern Hollywood’s crippling obsession with reviving old franchises. Perhaps, “retelling”, would be a better phrase.

The narrative follows fading country/alt-rock musician Jackson Maine, played by Cooper, as he meets, falls in love with, and jump-starts the singing career of the talented Ally Campana, played by Stefani Germanotta, better known by her stage name Lady Gaga. What transpires between the two characters is truly a beautiful artistic endeavor, highlighted by Gaga’s exceptional musical talent and Cooper’s deft direction.

The film functions on three different levels. First, it is a story about the powers and pitfalls of stardom. As Jackson aids Ally in her music career, we are witnesses to the sacrifices and struggles she must face as she reconciles preserving her artistic vision with the corporate demands of her manager. When Ally, achieving commercial success, performs an oversexualized and vapid song on Saturday Night Live, Jackson angrily confronts her about having nothing worthwhile to say as an artist. Second, it is a love story, a romance about finding someone you not only connect with emotionally and physically, but who lives and breathes the same vision of the world that you share. The charged glances that Ally and Jackson exchange when they first meet in a seedy drag bar, the way their musical craft feeds into one another like the push and pull of the tides, is brought to life thanks to Cooper and Gaga’s electric onscreen chemistry. Soulmates seems a paltry word in comparison. Finally, it is a story about addiction, about the demons we face and the past traumas that feed them. Jackson battles alcoholism and drug addiction throughout the film, while coping with the decline of his career and the loss of his hearing. It is a moving performance that reminds of us of our own failings and the ways we unintentionally hurt the ones we love.

The best parts of the film are the musical performances by Lady Gaga. From Ally’s opening sultry act in the bar, to her first appearance on stage with Jackson, Gaga’s voice will send chills down your spine. Part of the magic is how Cooper chooses to shoot most of the film in close-ups and mid-range shots; there are almost no long shots to speak of, and only fleeting glimpses of the crowds that fill the stadiums to listen to Jackson and Ally sing. This creates an intimate feeling, both in the emotional exchanges of their personal lives and their onstage harmonies. It is about the music and what is has to say, nothing more, nothing less. Pay close attention to how Cooper choses to frame each shot as well, what he weighs in the foreground and background. I was reminded of Sofia Coppola’s Lost In Translation at times, particularly the limo ride Jackson takes from his opening gig that mirrors Bill Murray’s Bob Harris as he arrives in Tokyo, a star similarly past his prime.

It helps that the film is rounded out with a stellar supporting cast, including Sam Elliot as Jackson Maine’s significantly older brother, Andrew Dice Clay as Ally’s father, and Dave Chappelle as an old friend of Jackson’s. Chappelle, despite his relatively brief appearance, delivers one of the most powerful monologues in the movie, reminding Jackson about how we all sometimes lose ourselves adrift in the seas of life.

If I had to criticize any portion of the film, it might be that some of dialogue strayed into melodrama, and some of the scenes of the first and second acts felt more like vignettes than connective plot threads. But I suppose that’s how life, love, and artistic expression truly is, not always cohesive, but sometimes disjointed. Cynics will declare A Star Is Born overplayed and clichéd, but it is unfair to dismiss something this well-crafted just because the story has been told before. Most of the human experience is spent rehashing old narratives because they give us a sense of understanding of our tumultuous lives. A Star Is Born does this in a way that is both familiar and fresh, both comforting and gut-wrenching. For anyone who has felt love and loss, it will not disappointment.