Dr. Bruce DeForge of the Graduate School and the School of Social Work shares his memories of UMB back when it was using mainframe IBM computers and h 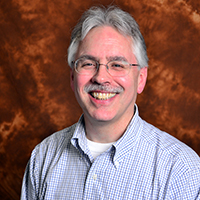 Dr. Bruce DeForge of the Graduate School and the School of Social Work shares his memories of UMB back when it was using mainframe IBM computers and had sheep grazing on campus.

Associate Professor Dr. Bruce DeForge has been on campus almost continuously since 1983. He’s spanned three schools, taught many students, seen Presidents and faculty come and go, and watched new buildings rise up. “UMB has grown significantly since I came here,” says DeForge. “The footprint of the campus has grown. Most of the schools have been replaced or enhanced.”

After a year-long stint with the Substance Abuse and Mental Health Services Administration, DeForge returned to UMB in 1999 with the School of Nursing, specifically teaching doctoral and masters students. In 2002, he moved to the School of Social Work, where he currently teaches masters of social work and Ph.D. students. “I have noticed over the years that students are getting more exposure to other disciplines on campus,” he says. “They used to exist and do all their work in silos with little interaction. The focus on inter-professional practice, education, and research has had a positive impact on education and training.”  Improvements to campus buildings and programs have been large facilitators of this change.

The campus infrastructure has likely been the factor that has changed most significantly since DeForge joined UMB. “The University of Maryland Medical Systems is almost unrecognizable from when I first came,” he recalls. The Health Sciences and Human Services Library was built on the site that used to house Tempo South, a building that contained most of the SOM’s residency programs, including his previous Department of Family of Medicine. From his office, he remembers watching Shock Trauma’s helicopter land on the roof of a parking garage across the street from MSTF, before the landing pad was moved on top of the hospital itself. “We could clearly make out the pilot’s face as he concentrated on trying to fly between the buildings and land safely on the roof,” he recalls. One of the most surprising recollections of UMB campus of the past was his memory of the Institute of Human Behavior: “I remember [they] used to have sheep grazing in their court yard,” he says, “which is rather ironic considering we were surrounding by a large urban community.” During his time here, the Schools of Nursing, Dentistry, and Pharmacy have almost all been replaced with new buildings, further expanding UMB’s footprint and changing campus aesthetic.

DeForge also witnessed significant technological shifts that happened at UMB over the years.  “The campus went from using mainframe IBM computers, with IBM data cards and magnetic tapes, to a vast array of advanced personal computers, tablets, and smart phone technology,” he says. He recalls how UMB and his department embraced technological advances as they came along: “Family Medicine was one of the first to develop networked personal computers,” he says. “We created and maintained an early version of an electronic medical record for our residents to document their clinical encounters with patients.” This kind of electronic medical record is now commonplace in physician offices and hospital settings.

The social climate of UMB and the surrounding areas has changed considerably as well. When he was working with the Department of Family Medicine in the 1980s and 1990s, the AIDS epidemic was on the rise, and Baltimore was hit hard. “Tempo South housed one of the first Infectious Disease treatment clinics that began to address the emergence of a new condition, AIDS, that was killing many young people across the U.S”, DeForge recalls. Through the years, he has noticed that UMB has focused more energy on building a better relationship with the community of West Baltimore. Recent developments like the UMB CURE Scholars Program and Community Engagement Center help facilitate improved connections, but are only a start. “It has been a major positive change that seems to be improving, but it still needs considerable resources to be successful,” says DeForge.

From the graduate student perspective, one of the most exciting changes that DeForge has seen is in regards to the research being conducted on campus. “The sophistication of research studies that doctoral students are involved in is amazing,” he says. “The advancement in technology, theory, methodology and statistics, has allowed doctoral students to to do very advanced, creative, relevant and important research that was not possible when I came to campus in the 1980's.”

Thanks to Dr. DeForge for agreeing to be interviewed, and for his many years of service here at UMB!