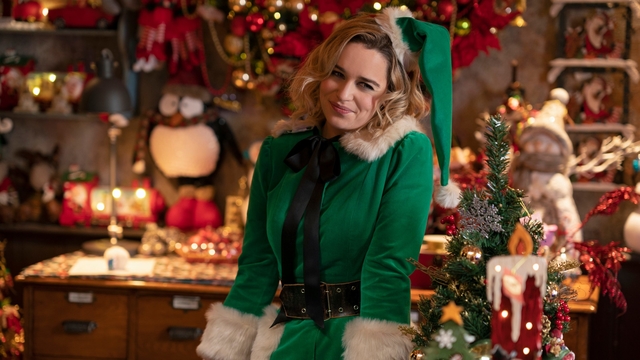 Last Christmas is the latest schlock to grace theaters this season. Directed by Paul Feig, whose highs include the comedies Bridesmaids and Spy but whose lows (and for me, it was an abysmal low) include the ill-conceived Ghostbusters remake, Last Christmas stars Emilia Clarke (Game of Thrones) as Kate, a troubled young woman recovering from a recent medical trauma, and Henry Golding (Crazy Rich Asians) as Tom, an unwavering optimist who tries to change Kate’s perspective on life. Rather than warming hearts and spreading holiday cheer, Last Christmas is a soulless, disjointed picture that will only serve to make you beg for the Christmas season to be over.

Kate works at a year-round Christmas store in London while struggling to try and make it as an actress and singer. She lives a life of reckless abandon, filled with late night booze binges capped off by brief romantic flings with whomever she meets at the bar. By chance she encounters Tom out in front of the store, and his strange but charming behavior leads to a budding romance in which Tom shows Kate how to help herself by helping others. The biggest problem with Last Christmas is the lack of chemistry between the two leads: while Emilia Clarke has proven her talent on Game of Thrones and Henry Golding has the natural good looks and charisma of a Clark Gable-esque leading man, neither appears convincingly smitten with the other, and the script gives them little fuel to kindle the flames of romance. The cast is rounded out by too many side characters, including Kate’s boss played by Michelle Yeoh, who injects some humor into what is a slightly offensive caricature of a role, and Kate’s mother, played by Emma Thompson, whose major interest in starring in/co-writing the film seems to be her desire to pull off a half-assed Eastern European accent for mixed comedic effect.

Last Christmas wanders down too many narrative side roads, including, but not limited to, a romance between Kate’s boss and a strange Danish man, Kate’s sister Marta coming out to their parents as a lesbian, and some randomly inserted scenes commenting on anti-immigration and Brexit sentiments that, however well intentioned, come across as jarring and cheap. Any of these could have been dropped in exchange for scenes to better flesh out Kate and Tom’s motivations, but instead of character development we get the low-brow toilet humor characteristic of Feig’s more mediocre projects. Much like the actors, Feig appears to have given little effort towards creative direction; he does nothing interesting with the camera, and too often employs choppy edits that nauseatingly disrupt what should be straightforward exchanges.

As a holiday film, Last Christmas, despite drawing on inspiration from the famous George Michael tune, lacks boisterous spirit or impactful, heartwarming moments. Most of the time it feels as if the film is merely going through the motions, more color-by-numbers seasonal cinema than the magic of tales of bygone Christmases. And before you accuse me of being a Grinch, it’s not that I can’t stand a little holiday cheese; Last Christmas is simply more artificial Cheez Whiz spray than warm gooey gouda. Tinsel is tacked on to salvage what is a poorly thought out script, although it could have been salvaged with some concerted rewrites. However, Last Christmas often violates the cinematic rule of show-not-tell and fails to earn the emotional punch its climax endeavors to achieve. I would stay at home with a cup of cocoa and some of the tried and true Christmas movie classics before stepping out into the cold for this one.