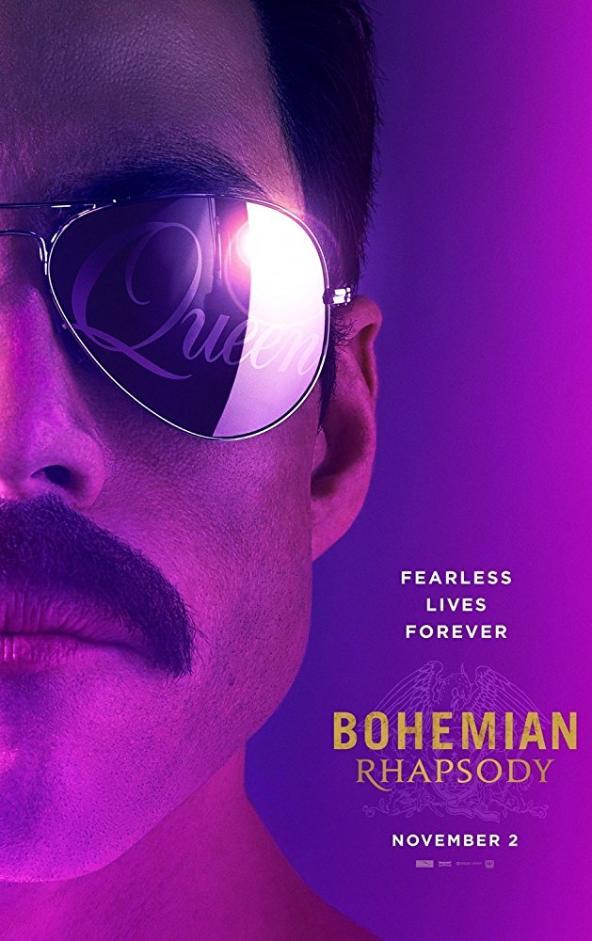 Is this the real story, or is this just fantasy? That was the question in the back of my mind while watching Bohemian Rhapsody. A musical biopic that delves into the story of legendary British rock band Queen, fronted by one of the greatest lead singers of all time Freddie Mercury, Bohemian Rhapsody unfortunately falls short of the legacy on which it is based. Following the band from their formation, through their rise to stardom in the 1970s, and culminating in their historic performance at the 1985 Live Aid concert, the film successfully delivers satisfying moments of rock and roll for those familiar with the band’s discography but plays fast and loose with the facts, straying dangerously into revisionist history territory.

Let’s start with the good: the performances deserve the most praise in Bohemian Rhapsody, undoubtedly (and predominantly) Rami Malek as Freddie Mercury. Malek doesn’t just look like Mercury; he captures his creative genius, his unbridled energy, and his eccentricity and showmanship that helped catapult Queen to the top of the charts. The rest of the cast bring their best to the table as the other band members, and the film includes some underappreciated roles such as Lucy Boynton (go see Sing Street if you haven’t) as Mercury’s longtime companion Mary Austin and Aidan Gillen of Game of Thrones fame, but it is Malek who appropriately steals the show. Every strut across the stage, every toss of the microphone, every flawless high note is pure Freddie.

Now there’s the bad: if you are looking for a historically accurate take on the band’s legacy, you won’t find it in Bohemian Rhapsody. This is not inherently a bad decision; I’m always skeptical of films that make claims to authenticity over substance. However, Bohemian Rhapsody is guilty of more than simply mishandling the timeline of when concerts occurred or taking creative license with the band’s song writing process; it rejects any nuance or deeper examination of Queen in favor of a paint-by-numbers, sanitized Hollywood plot. The bands forms, the band tours, the band writes hit songs, the band breaks up (which didn’t really happen), the band gets back together. Easy and done. This works when the film can play off the popularity of Queen’s music, such as a scene when the band comes up with the hit Another One Bites the Dust, but it falls apart when scenes meant to examine the personal lives of the band members and their reactions to fame feel shoehorned or cliché.

The ugly is how the film handles Freddie Mercury’s personal life and legacy, in particular his sexuality. Many other critics have condemned the film’s take on Mercury’s homosexuality, and I feel obligated to discuss it here. The best example I can provide of the morally objectionable way in which this is handled is an early scene in the movie when Mercury is on a payphone with Mary while on tour. We watch as Mercury follows the gaze of male stranger headed to the bathroom, lit in foreboding shadows and a tempting red glow, while Mary (his then fiancé) trails off on the phone. How else is the audience supposed to interpret this other than homosexuality as the proverbial snake in the Garden of Eden that is Queen’s success pulling Freddie away from the saving graces of a monogamous (and heterosexual) relationship with Mary? Later, Freddie tries to come out to Mary by telling her he is bisexual, but she responds, “No, Freddie, you’re gay”, and that’s the end of it. It only gets worse as the film goes on, with the other members of Queen depicted as down-to-earth school boys compared to Freddie’s eccentricity (as if Freddie Mercury was the only member of a 1970s rock band to do drugs or have promiscuous sex), Paul Anderson, a manager for the band and also homosexual, demonized as the agent that brings about Freddie’s fall from stardom, and Freddie’s return to the band just before Live Aid shown to be his final redemption in the face of an AIDs diagnosis (which actually occurred after Live Aid). At best, it reeks of executive meddling to make a family-friendly version of Queen’s story; at worst it’s blatantly homophobic and intolerant. Freddie Mercury’s sexuality and his expression of sexual liberation as part of his art, character, and legacy deserve better than this.

The final point worth examining is the recreation of the Live Aid performance itself at the conclusion of the film. This is the highlight of the entire experience, a technically impressive feat that captures the majority of the twenty-one-minute performance cut with actual footage of the audience at Wembley Stadium in 1985. You are dropped on stage with the band as they whirl through hits like Bohemian Rhapsody, Radio Ga Ga, and We Are the Champions. It’s a thrilling and moving tribute to what has been considered the greatest live performance of all time, but in the context of the rest of the film I can’t help but feel that it falls a bit short of what this movie could have been. If you boil it all down, the real artistic power stems from Queen’s music and their real performance that inspired the scene; the actual film Bohemian Rhapsody lacks any of that inspiration or energy.

Unlike most negative reviews, I do not want this one to dissuade you from going to see Bohemian Rhapsody. I went to see it with my parents (who remember watching Live Aid) and they were thoroughly entertained. If you are a fan of Queen, there’s plenty of foot-stomping, hand-clapping moments to whet your appetite. However, the sins of this film do raise important questions about the role (and perhaps, responsibility) of critically engaging with cinema. While filmmakers decide what to present on screen, audience members are the ones that decide what the meaning behind the presentation is, regardless of intentions. Whatever the makers of Bohemian Rhapsody intended, the reality rings hollow in comparison to the dynamite star-power of Freddie Mercury and Queen.