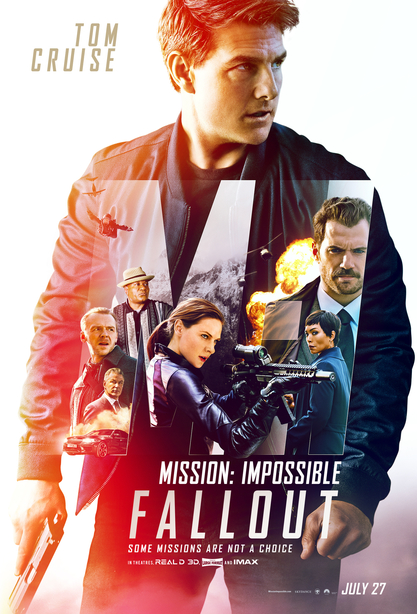 The best action movies are ones that bring you to the edge of your seat, taking you on a dizzying ride of adrenaline-fueled, hair-raising stunts that defy the laws of physics. Mission Impossible ­– Fallout achieves this with aplomb and dexterity, in what may be the best blockbuster of the summer.

Director Christopher McQuarrie returns to the helm of this franchise with a direct sequel to the successful Mission Impossible – Rogue Nation. Taking place two years after the events of the previous film, Fallout finds secret agent Ethan Hunt (Tom Cruise) tasked with tracking down a sinister group known as the Apostles, hell-bent on causing mayhem with stolen plutonium cores, all the while haunted by the lingering presence of former Syndicate leader Solomon Lane (Sean Lane). Hunt teams up with longtime fellow IMF agents Luther Stickell (Ving Rhames) and Benji Dunn (Simon Pegg), as well as newcomer CIA assassin August Walker, played by the physically imposing Henry Cavill, and it’s off to the races.

From a gorgeously shot skydiving stunt through a thunderstorm above Paris, to a rooftop chase across London, to a precipitous plunge down the cliffs of Kashmir, the highlights of this film are the action set pieces. Everything is well choreographed, and the scenes move with the fluidity of a ballet performance coupled with the heavy gut-punches of a boxing bout. It’s pure Hollywood escapism at its best, á la Raiders of the Lost Ark or Diehard. McQuarrie demonstrates the power of practical special effects in an age where CGI has come to rule the silver screen, as well as the value of well-blocked fights and shootouts. There are none of the fast cuts and nauseating close-ups that have marred so many past action blockbusters (looking at you, Bourne franchise), and Fallout delivers on all the tropes you expect from the spy genre: the gadgets, the pithy one liners, the double-crosses.

The plot twists and turns and almost gets lost in itself at times (I sympathized with Henry Cavill’s character when he exclaims “Why does it all have to be so f---ing complicated?”), but it never drags or stumbles. I thought Tom Cruise may finally be showing his age with this one, but he proves he can keep up with the best of them. Henry Cavill brings a brutal physicality to his role that contrasts with Cruise’s poised and precise Ethan Hunt, and their duo is complimented by a talented supporting cast that includes the return of Rebecca Ferguson as former MI6 agent Isla Faust, Angela Bassett as cold, calculating CIA Director Erica Sloane, and Vanessa Kirby as mysterious arms broker the White Widow.

One of the major themes of the movie is sacrifice, as Ethan Hunt is forced to choose between saving those he cares about and completing the mission at hand. The plot probes the values of trust, loyalty, and morality in a job that demands a cool detachment from the events around you, but it never lingers too long on any existential questions. It’s stimulating without detracting from the action, insightful without being heavy-handed. It reminds us that with every choice, there are consequences to be paid.

With so many espionage thrillers that have come before it, it seems impossible that Fallout could bring anything new to the table that has not already been done before. However, Cruise manages to remind us why we love to go to the movies in the first place, to watch the hero defy the odds, defeat the bad guys, and save the world. The film demonstrates that masterful coherence of character-driven screenplay and elegant action set pieces that keeps the tension knife-edged until the very end. While many franchises begin to lose steam this far in, churning out mindless sequel after mindless sequel, Mission Impossible ­– Fallout breaks the tedium with a truly enjoyable cinematic experience. Your mission, if you chose to accept it, should be to see it as it was meant to be seen: larger than life, on the big screen.