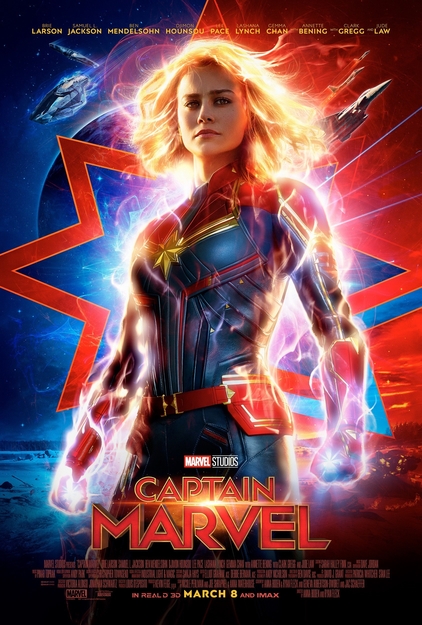 The latest installment in the Marvel Cinematic Universe crashes into theaters in the form of Captain Marvel, a long overdue female-led superhero film in the sprawling franchise, but it lands more with a whimper than a bang. For hardcore Marvel fans like myself and casual audience-goers alike, Captain Marvel has an abundance to offer in the alien-bashing, high-flying, and laser-blasting department, but underneath the dazzling exterior it lacks a certain level of thematic substance previous Marvel films have delivered, particularly with regards to its protagonist’s story arc.

Brie Larson stars as Carol Danvers, AKA Vers as she is known at the beginning of the film. Struggling with hazy memories of a previous life on Earth, Carol is a member of the elite military team Starforce belonging to the extraterrestrial Kree Empire, led by her mentor Yon-Rogg (Jude Law). The Kree are fighting a nefarious alien race known as the Skrull (for reasons never fully explained), led by the sinister, shape-shifting Talos (Ben Mendelsohn). This introductory intergalactic material is hastily broad-stroked, albeit in the context of some thrilling action sequences, before Carol finds herself crash landing on our world, specifically Los Angeles in the 1990s, where she tags along with a familiar face from previous Marvel outings: a de-aged Samuel L. Jackson as Nick Fury before he gained the signature piratical eye-patch.

Captain Marvel soars when it allows room for the dynamic chemistry between Jackson and Larson to breath, Larson playing a self-assured yet stoic version of Tom Cruise’s Maverick from Top Gun and Jackson a quippy, younger version of the grizzled spymaster we know from The Avengers. It sinks when it gets bogged down in an overly gratuitous amount of 90’s gags (Look! Blockbuster! Dial-up internet! Nerf guns!), and loses steam trying to elaborate on Carol’s murky flashbacks while hastly scrambling to pick up the assorted plot threads in the Kree-Skrull conflict, a reunion with Carol’s old Air Force comrade Maria Rambeau (Lashana Lynch), and Carol’s past relationship with the mysterious Dr. Wendy Lawson, played by a criminally underutilized Annette Bening. Ben Mendelsohn deserves a heap of credit for injecting some life into the second and third acts with his engaging and charismatic performance as Talos, who literally and figuratively is more than he appears, but it’s not enough to salvage every misfire or smooth over the jagged edges.

I was surprised to learn that Captain Marvel was directed by Anna Boden and Ryan Fleck, known for fantastic indie films such as Half Nelson and Sugar, which were intimate character pieces. Unlike other Marvel movies like Thor: Ragnarok and Black Panther that allowed the director’s unique style to shine through the conventional superhero beats, Captain Marvel’s need to set up the next big phase of the franchise seems to have drowned out Boden and Flecks’ talent for digging into the dark corners of complex characters. Brie Larson’s Carol is cocky and cool, but she’s also a bit bland and lacks a level of vulnerability needed to humanize her when she’s not photon-blasting baddies. I don’t blame Larson’s acting talent, that’s already been displayed (and rewarded) in Room. I blame a script, and perhaps, studio meddling, more focused on delivering a product than an artistic endeavor.

With that being said, the obvious thematic goal of Captain Marvel is to deliver a firmly feminist piece in a catalogue of male-dominated blockbusters. It deserves praise, much like Black Panther and Crazy Rich Asians, simply for excelling in the representation department and offering a heroine young women can aspire to be; however, if you really think this is the first time Hollywood has dished out strong female leads, I can direct you to a backlog of decades of cinema to watch (maybe start with Alien). Throughout the film, Captain Marvel displays insightful commentary on the daily struggles women face in society: her mentor chastising Carol to learn to control her emotions, a sleazy biker goon demanding that she “smile”, her past life as an Air Force pilot in which women, despite wanting to serve just as much as their male counterparts, were denied the opportunity to fly in combat roles. However, what the feminist angle of Captain Marvel really has to say about the complexity and strength of womanhood leaves a bit to be desired. We are never given much insight into who Carol is or what makes her tick; she’s strong because she is, because she has superpowers and knows how to use them. While so many previous Marvel films such as Iron Man, Captain America-The First Avenger, and Thor have emphasized that it’s the person who makes the powers, not the other way around, Captain Marvel seems to have forgotten this mantra. As much as I enjoyed watching Carol go full binary and smash through alien spaceships, I couldn’t help but think Tony Stark’s ~30 min character arc in the cave in Iron Man, in which he is forced to confront his arrogance and irresponsibility in order to fully realize his potential, displayed more growth and vulnerability than all of Captain Marvel’s roughly 2 hour running time.

You should not walk away from this review and think I hated Captain Marvel, because I didn’t. I have loved the characters of the Marvel Universe long before they started putting Iron Man and Captain America up on the big screen, and I’m thrilled that now we get to see Captain Marvel alongside the other Avengers. I once had an argument with a friend after seeing Ant-Man and the Wasp about whether it was a good film. While I was willing to ignore its flaws on the grounds that it kept me entertained, my friend argued that after so many movies in the MCU, particularly excellent ones like Captain America-The Winter Soldier or Guardians of the Galaxy, they really should be turning out more high-quality blockbusters than backtracking to mediocre ones. That’s how I feel about Captain Marvel: they should know better than to be making the mistakes that were made here. That being said, I have no doubt that the Russo brothers will be able to do far more with Carol Danvers in Avengers: Endgame, and I look forward to seeing her in future comic book inspired installments. Higher, further, faster.