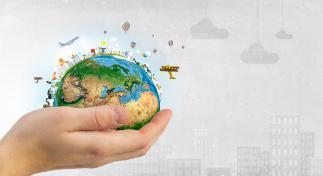 We often think of global health as needing a passport: travel, engagement with new cultures and languages, adventure.

This image helps explain the silowing of global health and community public health fields in academia and service.  “With this divided perspective, are we missing the opportunity to learn, collaborate, and share successful interventions to address disparities across borders both near and far?  Are the interventions that work (or don’t work) locally instructive for community health workers overseas, and are there not lessons learned overseas that could work here?”  (Rowthorn, Edwards, Lipscomb, Olsen, 2016)

His words come alive when we think of yearly influenza seasons and outbreaks of diseases such as AIDS, SARS, and Ebola as these diseases do not follow geographic, political, or cultural boundaries.  Global health “places a priority on improving health and achieving equity in health for all people worldwide.”

But what does global health look like?  Ebola offers an excellent and yet tragic example of global health today.  First the background:

Ebola first emerged in 1976 in Congo, Central Africa, and in Sudan, East Africa, together affecting 600 people.  But it stayed largely on the African continent and was only know by disease scientists.

Then in December, 2013, an 18 month old boy in Melandou, a village of 31 households, Guinea, came in contact with a bat, developed a strange illness and died two days later.  Two weeks later, members of the boy’s family, midwives, traditional healers, and hospital staff who had treated the boy had also died.

Within another week, the disease had spread to four sub-districts: unprotected exposure, more cases and deaths, more funerals, and further spread had been established.  Two months later, March 21, the disease was identified as the Congo Ebola Strain, and two days following was posted on the WHO website.  In total, 49 cases and 29 deaths were officially reported.  Within two months from the first case, it had become an epidemic with global consequences.

During that two-month period and continuing throughout the year, understanding, containing, preventing, and offering care has required engagement of doctors, nurses, social workers, equipment engineers, drug makers, lawyers, hospital workers, airline TSA agents, politicians, communication specialists, local healers, and families.  These individuals are throughout the US, West Africa, Europe, Japan and China, and even Latin America.  The village of Melandou, Guinea, was a global health epicenter.  (WHO)

As health officials globally have further reviewed, analyzed, and written about this particular epidemic, global health lessons have emerged that affect us all, regardless of our discipline, our health issue, and our place of work.  For example:

-  Disease with myths and fears spread across borders in real time, social media has no filter.

-  Local treatment and prevention practices cross regions of the world.  In the case of Ebola, the practices crossed the US, Europe, West Africa, Africa.

-  WHO has a critical global leadership role

The Ebola crisis also focused our attention on how the interprofessional health team became the norm, as no single discipline expertise could contain the global outbreak.  Even non-health professionals had key roles.

An essential framework for action that took hold quickly was in seeing the response to Ebola as a global response (discard idea of us, U.S, and them, International) and then applying specific actions locally and with respect to working within local customs and traditions.  For example, in the West African Ebola countries, six feet apart respectful greeting traditions quickly emerged and burial practices changed.  International airports asked globally consistent health and travel questions within new travel protocols.   New quarantine protocols, adapted for US and each West African country were established.

Health care workforces were trained to understand and follow global health frameworks related to Ebola while learning to be comfortable using local cultures and traditions to introduce and build health solutions.

Today and mostly without headlines, variations of the Ebola crisis are being repeated with Malaria, the Zika virus, HIV/AIDS, diabetes, cardiovascular disease, mal-nutrition, and violence to only begin the list.  The diversity of global health issues and its global/local interface gives us many choices in supporting global health initiatives.  Local health initiatives have global consequences.

The University of Maryland, Baltimore, Center on Global Education Initiatives sponsored a workshop in 2015 around a working definition of global/local health and healthcare that suggests “teaching or applying a global perspective and understanding of transnational health issues, determinants and solutions to address the health needs of communities everywhere, particularly vulnerable communities” (Rowthorn, 2015).  From this workshop came seven program elements that should be included in any global/local health programming.

The Ebola example illustrates why these programming elements are so important.  What we teach, what we learn, and what we deliver to clients and patients in any community has global implications.  We are no longer isolated in our approaches to health, an opportunity we should embrace.